This week, we take you “under the hood” of a restoration job so you can see some of the work that goes into making an ancient record sound newish.

The specimen of our efforts: Blue Amberol 2057, “One Fine Day” from Puccini’s Madame Butterfly, by Agnes Kimball. This was recorded in 1912 and released on wax Amberol 1007 and then made into a Blue Amberol and re-released in November 1913. The cylinder is in very good shape, it’s loud and clear, but there’s one problem: it has an abrasion that goes lengthwise all the way across the grooves. This results in an obtrusive “swish” sounding prominently above the vocal and music once per revolution from start to finish.

There are a few ways we could deal with this. One would be to try to dull the sound a little bit and hope the listener will forgive the imperfection. Another way is to reduce, if not eliminate, the problem with some precise surgery. This is what we’ll do, since the rest of the record’s surface is so clean; we want this restoration to sound as clear as possible.

Now, I’ve already done some preliminary work on the whole file, such as declicking and decrackling. What you see in the first illustration is a 20-second spectrographic display of a section of the recording, about a minute into the playing. Those bright bars rising up vertically at regular intervals are our swish, and as you can see, it’s a nasty one. Take a listen. 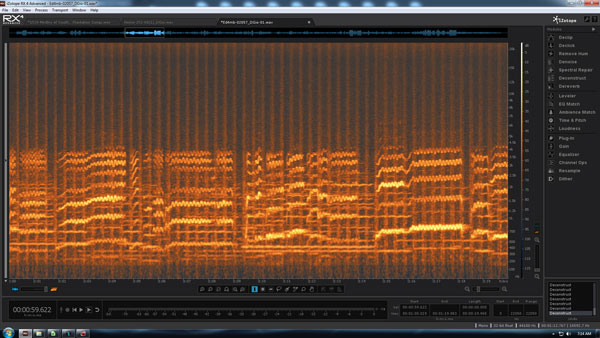 The swish, once per revolution.

So I’m using the Deconstruct module in iZotope’s Rx 4. This very clever algorithm determines what is good signal and what is surrounding noise, and then I tell it to pull down the noise around the signal with the aim of getting that noise to match more closely the surrounding noise. The idea is to blend. I’ll highlight the first instance of the swish, and through a little trial and error, I’ve arrived at what I think is the right strength for pulling down the noise. The second illustration shows the selection before the application and the third shows it after. 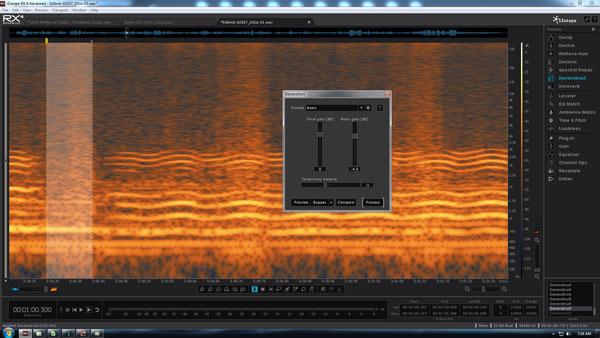 One instance of the swish selected before application of Deconstruct. 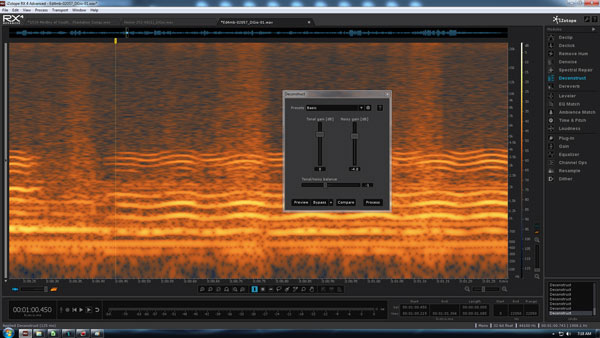 The prominence of the repaired swish is diminished.

Trouble is, the swish is a complicated beast, so the rise has a different intensity than the decay, meaning I need to apply Deconstruct a second time. As you can see, the remaining problem is smaller in width now. Luckily, the same strength I used on the first pass will work a second time. The third and fourth illustrations show the second pass before and after. 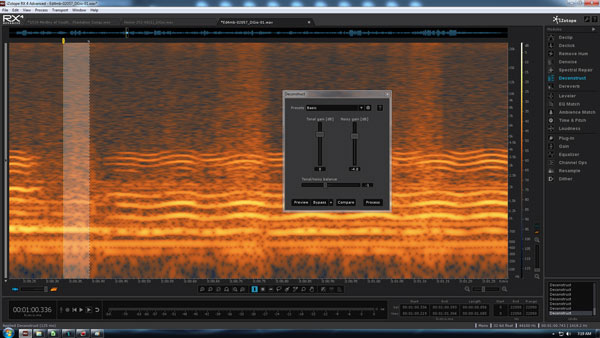 A second pass of Deconstruct is required to blend in the swish with surrounding noise. 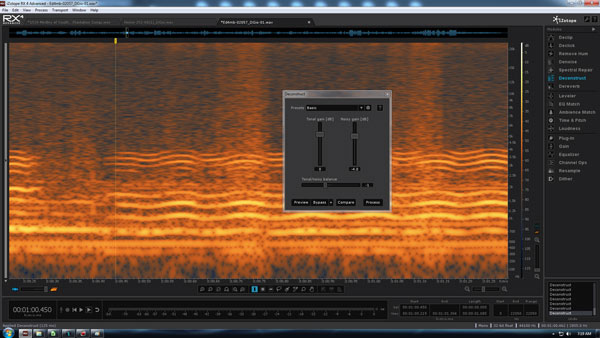 The repaired swish, while not completely gone, now blends in well with surrounding noise.

Now, I just need to do this for each instance of the swish. It’s a four-minute-plus record, spinning at 160 rpm, so that means 640 times or so to repeat this repair. Over the course of the recording, the character of the swish will change, and I will need to alter my approach. Sometimes I’ll raise or lower the strength of the Deconstruct application, and in some cases I’ll need an entirely different (often simpler) approach. Additionally, there will still be some residue of the invading swish, but this can be addressed in a number of ways that won’t take as much time. This final illustration shows the 20-second clip after preliminary repair. Have a listen to the changes. 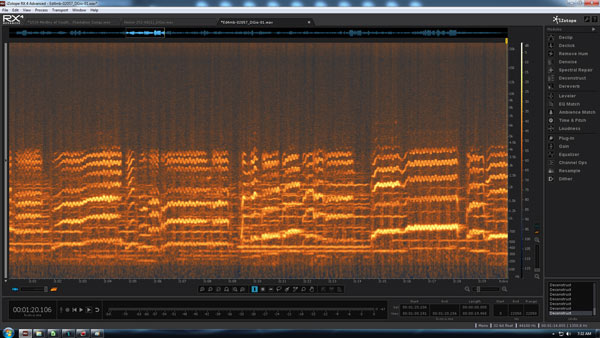 The swish has been attenuated, once per revolution, over the 20-second selection.

It’s the sort of work that makes you feel like you’ve accomplished something, but it can also drive you crazy. Probably not everything is going to get this kind of detailed repair work. But today Agnes gets the star treatment so that we have this blog to bring to you!

One thought on “Removing the Cylinder Swish”