By “acoustic era,” we mean the period before recordings were made with electricity and microphones. That’s everything before about 1925–going back all the way to roughly 1888, when the commercial industry got going. During these four decades of recording, singers and players would perform into a horn, which funneled the sound waves through tubing to a diaphragm vibrating in sympathy with the waves and tickling a stylus that would then etch grooves into a wax cylinder or disc master. Acoustic recordings have a different sound than modern records–the extreme high and low frequencies are missing–but also have a rawness and beauty due to the fact that they were all recorded live: there was no multi-tracking or ability to edit takes. 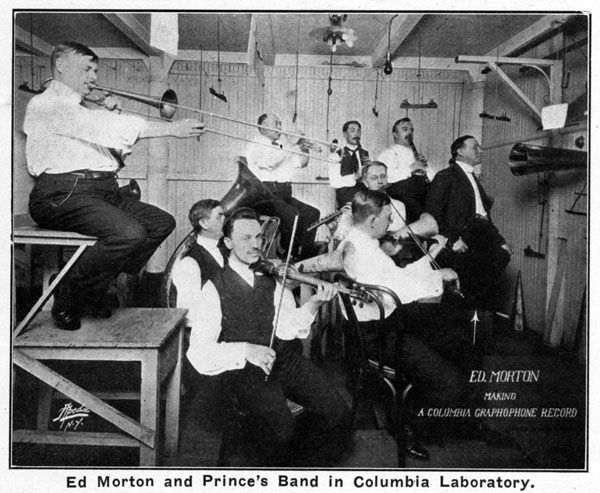 Above: Eddie Morton makes an acoustic recording in 1915. Notice the staging of the session, with the singer closest to the recording horn (so his voice can be picked up most clearly) and instruments staggered behind him, with the loudest instruments all the way at the back. (Archeophone Records Collection)

One thought on “About the acoustic era”