We have a much better idea than ever before of who was in the various iterations of the Unique Quartette, as well as some pretty good guesses as to which of the members participated in the group’s recordings. Good as his work was in Lost Sounds: Blacks and the Birth of the Recording Industry, 1890-1919 (Urbana: University of Illinois Press), Tim Brooks faced significant limitations back in 2004. After all, there was no newspapers.com or genealogybank.com all those years ago. It is exciting to update the record. But it will be difficult to beat down all the misinformation out there on the Web by people who have uncritically repeated the guesswork.

Tim identified ten men who participated in the quartet over a ten-year period: Joseph M. Moore, William H. Tucker, Samuel G. Baker, J. E. Carson [sic], James Settles [sic], Walter A. Dixon, Ben Hunn, Burt Lozier, Thomas Craig, and Frank DeLyons. As happens in news accounts, names often get mangled, so Carson should really be “Cayson” and Settles should be “Settle.” It turns out that these two misapprehended gentlemen, in addition to the founder and leader Joe Moore,  are essential to the story of the quartet. Our research indicates that Moore (second tenor), Settle (first tenor), and Cayson (baritone) had the longest tenures of anyone in the Unique Quartette. That means, for one thing, they would have been very comfortable singing together.

The bass singer changed several times, but the biggest revelation is that Frank DeLyons, whom Brooks found to be a minor player who served a short time in 1898, actually had first sung with the group in 1893. The lineup of Settle, Moore, Cayson, and DeLyons was verifiably intact from late 1893 through 1895, and probably into 1896 as well. That means their union stretched from the end of the North American period (think: “Mamma’s Black Baby Boy” from Lost Sounds) through the period when they recorded for U.S. Phonograph and Walcutt and Leeds, which is covered by our Celebrated vinyl release. So it is highly probable these four made at least some of the records we have restored and issued.

END_OF_DOCUMENT_TOKEN_TO_BE_REPLACED

At the time Tim Brooks published Lost Sounds: Blacks and the Birth of the Recording Industry, 1890-1919 (Urbana: University of Illinois Press) in 2004, he was aware of three extant cylinders made by the Unique Quartette. First was “Mamma’s Black Baby Boy,” made ca. 1893 for the North American Phonograph Company. Two others were made ca. 1895-96 for an unknown company: “Who Broke the Lock” and “Down on the Old Camp Ground.”

The first two, “Mamma’s Black Baby Boy” and “Who Broke the Lock,” we included on our Grammy-winning companion CD to Tim’s book, Lost Sounds: Blacks and the Birth of the Recording Industry, 1891-1922. The third was far too rough to be included on the set.

Since the 2005 appearance of Lost Sounds two collaborators have unearthed several additional cylinders by the Unique Quartette that date to this 1895-96 period, again made by unknown companies, but very likely by Walcutt and Leeds or the United States Phonograph Company. Five one-of-a-kind recordings by the Unique are heard on Celebrated by the public for the first time.

END_OF_DOCUMENT_TOKEN_TO_BE_REPLACED

The six sides recorded by Gus Haenschen’s Banjo Orchestra in 1916 are rare—very rare. In fact, before The Missing Link project was compiled, chances are no one had heard all six of them since they were first released. Gus himself stated that he never personally owned copies of the discs, and the Haenschen family currently doesn’t own any copies either. Only around 200 of each title were pressed in the first place, and it took locating them to realize just how rare they really are.

END_OF_DOCUMENT_TOKEN_TO_BE_REPLACED

It’s only been a little more than a year since Colin Hancock first wrote us up with a rough idea about reissuing the six personal records made by Gus Haenschen and his banjo orchestra in 1916. We’d already released one of them, “Sunset Medley,” on our 2003 issue, Stomp and Swerve—and we’re big fans. So, had Colin located the other five discs?

He had a line on four of the six, thanks to David Sager and Mike Kieffer, with a strong likelihood of the fifth. When that fifth came through, from Rob Chalfen in Boston, we were all getting pretty excited. So close! There was one more, elusive, with rumors of it being in the collections of two mutual friends: “Maple Leaf Rag,” the legendary piece by Joplin, performed by one of his students while the master was still alive. Sager knew where to find it. He told us to go to Joplin’s one-time home, St. Louis, and there we would find it in the collection of the late St. Louis Ragtimer, the great Trebor Tichenor.

Trebor’s daughter Virginia and son-in-law Marty Eggers took David’s advice, went searching among his thousands of 78s and found it! Marty and Virginia, who are spending time between Oakland and St. Louis, graciously worked out a time for us all to meet, Colin drove up from Texas, and we were joined by the fantastic musician T. J. Müller to do a transfer session.

END_OF_DOCUMENT_TOKEN_TO_BE_REPLACED

Some of you like to research the old acoustic-era artists, searching for authoritative answers to their dates of birth and death or greater details on their lives than has been known heretofore. Maybe you have had the experience of digging in on an artist in newspapers, genealogy records, and other online archival databases, only to come up completely empty after hours and hours of fruitless, exasperating effort. Then, after a few weeks, a few months (years even), you decide—silly you—to try again, against your best inclinations.

END_OF_DOCUMENT_TOKEN_TO_BE_REPLACED

Earlier this year, the Library of Congress released its 2018 inductees onto the National Recording Registry. The oldest items preserved onto the Registry for their “cultural, historical, and aesthetic” significance are titled thusly: Yiddish Cylinders from the Standard Phonograph Company of New York and Thomas Lambert Company. Here’s the Library’s description:

These cylinders originally produced by the Standard Phonograph Company of New York are believed to be the earliest recordings of Yiddish songs. Eventually released by the Thomas Lambert Company of Chicago, these releases (some manufactured in unusually vibrant colors) also represent the first releases by an ethnically-owned and ethnically-focused record company, a risky venture at a time when a US-based audience for foreign-language music had yet to be established. These surviving 20 cylinders of 48 once produced, provide an insight not only into the Yiddish-speaking community of the era but also into the difficult assimilation of Jewish immigrants arriving to America at the turn of the century. In 2016, the Archeophone label lovingly restored and packed the cylinder into a CD-set.

The shout-out in the last line is appreciated, yet there are several things to unpack here.

The only research and writing on the subject of these cylinders is what comes with the above-referenced release: Attractive Hebrews: The Lambert Yiddish Cylinders, 1901-1905 (ARCH 8001). Prior to the unearthing of these rare records by Archeophone’s network partners, no one who had ever written of the existence (in catalogs) of the records had actually heard any of them. Imagine our surprise, then, when the announcements at the beginnings of the cylinders do not refer to the “Lambert Company of Chicago” as on other Lambert records but instead identify themselves as “Standard Record”s. Deep dives into newspapers, city directories, and legal notices turned up very little about this company—only that it existed for about three years in New York City’s theatre district before going bankrupt in 1903. It seems to have been run by a man named George Lando, an optician who promoted his twin product lines—eyeglasses and phonograph records—under the advertisement “To Hear and to See” in the Jewish Daily Forverts in 1901.

END_OF_DOCUMENT_TOKEN_TO_BE_REPLACED

Archeophone’s 4  Banjo Songs, 1891-1897 by African American recording pioneer, Charles A. Asbury, is nominated for Best Album Notes, written by myself (Richard Martin) and Ted Olson. We’re very appreciative for this recognition, but there is a misapprehension floating around out Asbury’s background that needs addressing.

Some reviewers have summed up the notes by saying that there is uncertainty about Asbury’s race, and that I take the position he was black. Let me be perfectly clear: there is no uncertainty. Asbury was a light-skinned African American of Spanish origin. From the records we have found, he lived his entire life as a black man, in the company of other 19th-century blacks, and there is no evidence whatsoever that he ever tried to pass for white.

END_OF_DOCUMENT_TOKEN_TO_BE_REPLACED 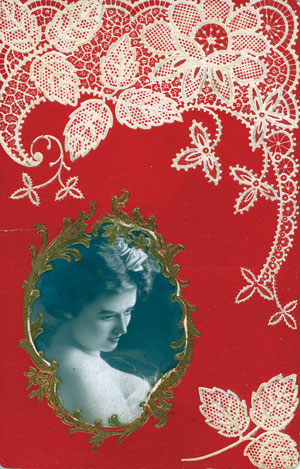 With the recent acquisition of Helvetia 1002, our upcoming set, Alpine Dreaming, will now have every known release put out by the small Helvetia label in the early 1920s. Thanks to Eric Gallinger for contributing that record to the effort. Eric found the disc at an estate sale in Oregon and, inspired by his wife’s Swiss ancestry, picked it up as an extraordinary type of record. We found him and his kids on their YouTube channel, JEC&T 78’s, and the result is as complete a telling of the Helvetia story as is possible at this point.

Ferdinand Ingold, a Swiss immigrant to Monroe, Wisconsin (the Swiss cheese capital of America) operated a novelty and import company, specializing in post cards such as the lovely and unusual embossed lace postcard shown here. By the mid-1910s he saw a need to supply his like-minded customers of the immigrant community with recordings from their homeland and was able to procure many titles from Switzerland for resale in the U.S. Then Ingold got the idea to start his own record company to make and sell records by the community for the community. END_OF_DOCUMENT_TOKEN_TO_BE_REPLACED

Last week we wondered whether record titles, such as those listed in a ca. 1891 catalog of the New Jersey Phonograph Company, might not all have been actually recorded. Then we traced the offerings of Charles Asbury in New Jersey/U.S. Phono. Co. and Columbia catalogs from 1892 through 1897 to see which of his records were “hits”—cylinders likely to have been made again and again over that six-year period. Let’s revisit that 1891 New Jersey pamphlet.

As we noted, the names of artists were not provided. This fact surprises many of us today, as we can’t imagine buying a record just to buy a record. It’s the talent that we’re interested in. But in 1891, the recording business was brand new, and the identities of the performers would have meant nothing to consumers. That would change quickly, as experienced exhibitors and arcade owners came to recognize and seek out cylinders by the best performers for their operations.

END_OF_DOCUMENT_TOKEN_TO_BE_REPLACED 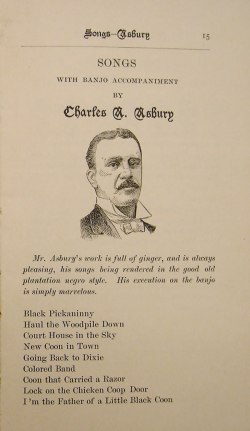 We said on Monday that maybe by comparing the early catalogs of cylinder companies we can figure out which titles were recorded for certain because they continued getting listed month after month and year after year. A title that appears in a catalog once and then disappears—perhaps that title never actually got made because no clients showed interest in it.

In the case of Charles A. Asbury, whose work we release today on 4 Banjo Songs, 1891-1897: Foundational Recordings of America’s Iconic Instrument, there were 16 selections by him in the October 1892 catalog of the New Jersey Phonograph Company. That number decreases to nine in early 1894, but all nine were titles included among the 16 from earlier. So these are the “winners.”