Black History Month got off to a good start for lovers of acoustic sound when Vulture named “The 100 Jokes That Shaped Modern Comedy” this week. There in pole position was “Nobody” by Bert Williams from 1906. The compilers note that they weren’t looking for “one-liners” necessarily, as much as for “a discrete moment of comedy.” They contend that Bert’s performance of “Nobody” gains its power from the tension between its upbeat musicality and its mournful lyrics. It seems a stretch to call the music “upbeat”—it’s fairly doleful throughout—but we’ll grant that the chorus has a certain whimsical flavor that adds irony to Bert’s lament. Of course, the biggest musical joke in the piece lies in the trombone swoops that imitate human wailing. 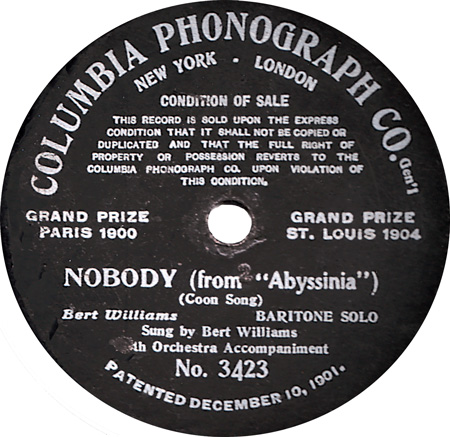 The label for the 1906 recording of Nobody (Archeophone Records Collection)

Vulture got it right by saying it’s the self-deprecation of the unfortunate loser that makes “Nobody” so funny. The fact that a black man would give comedic voice to his trials and tribulations, the indignities and put-upons suffered at the hands of others really was revolutionary. Williams was the highest paid African American (well, Caribbean by birth, actually) in show business and had more leeway in what he did on stage than others who looked like him. When he spoke-sang the words of “Nobody”—when he made those irresistible mugging faces and did his shuffling dance—he worked his way with laughter into the hearts of white Americans who may not have thought much about social equality. Lots of other people recorded the song—from Arthur Collins to Johnny Cash—and those versions aren’t as funny as Bert’s.

END_OF_DOCUMENT_TOKEN_TO_BE_REPLACED

A horror story of improper 78 packing and a photograph documenting the carnage has been making the rounds on the phonograph group boards this week. It seems that, even with the buyer having described safe packing techniques, it all went wrong. Maybe it was the seller trying to cram 60 discs into one priority mail box. Our theory is that the seller didn’t like being told what to do and stomped them before tossing the shards in the box. One observer remarked that the seller probably dropped the box repeatedly until the crunching noises ended. A quick search of the groups will tell you that this situation is far more common than it should be, though most of the destruction is limited to a few records at a time. We’ve certainly had a few nightmares too—as well as a few really oddly packed records that made their way to us unbroken purely by miracle . One recalls an Arthur Collins Berliner, taped between 2 pieces of particle board and mailed to us inside a pizza box.

A box of broken records. (Image by Ric at Kahuna Archives, via the 78s and Phonograph group on Facebook.)